Over 200 years ago, the visionary Mary Shelley started questioning the creative spark of life-making and created a “human” monster. This resulted in an assemblage of pieces who were brought back to life, a paradigm of the lights and shadows that have always characterized human creation. Could the reification of the voluptuousness of knowledge and the sacred fire of creation generate “ugly monsters” or be useful for progressing the universe?

Nowadays the most visionary and avant-garde artists and makers have crossed the bridge that separates the two “realms,” the analogical and the digital, to create artworks that combine the potential of the two, and in doing so giving life to “hybrids” like Frankenstein. Then the fundamental question becomes: how could it be our “Hybrid” future, and how could we combine the realm of nature with the sphere of digital language?

Throughout an excursion into Digital Art in Italy as a precursor experience of a world revolutionized by digital technology, which makes virtual possible, and that breaks down boundaries between fantasy and concreteness. Bruce Sterling, Jasmina Tešanovic, and Gianluca Del Gobbo will describe the panorama that has developed over the years thanks to the two most influential Italian Festivals of Digital Arts: Fotonica and Share Festival.

The conference is part of the Share Festival’s calendar, under the artistic direction of Bruce Sterling, which this year will examine the figure of Frankenstein: the complexities and contradictions of the technological world of the latest generation. 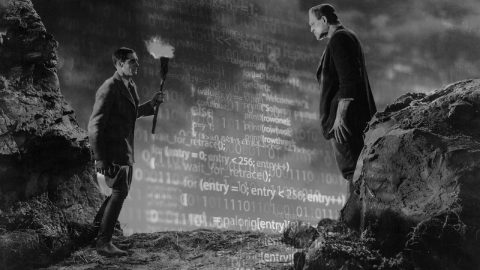