Piemonte Share is announcing a new edition of the Share Prize, the international competition designed to discover, promote and support art in the digital age.

Entries for the Share Prize can be submitted from 20h June to 20th August 2013, by completing the entry form on the website www.toshare.it. The Share Prize this year will focus on the theme for the 9th Share Festival, entitled Real Time | Real Space.

This year, Share Festival will be shining the spotlight on how communications have become simultaneous and geolocalized in contemporary cities, sharpening its focus and critique onto the integration of digital networks in the urban environment.

Artists are not just aesthetic messengers but social agents, who use networks to change the way we think about media and relational space. The artistic practices they pioneer create critical prisms through which to view urban space. The artistic realm is overlapped with the physical, urban world to explore a new dimension in which art can redirect the social and political leanings of networks, communities and artists into performances.

Instead of taking humans into virtual space, digital technology has enhanced the way we interact with others and with the physical world. Today, the map is no longer a representation of the territory; rather, it incorporates it. How do people shape, and how are they shaped by, the integrated platform created between data and location?

An international jury will short-list six projects for the prize, who will be selected to take part in the 9th Share Festival, to be held in Torino from 8th to 17th November 2013, at the Regional Museum of Natural Science.  The names of the short-listed finalists will be announced by the beginning of september 2013. 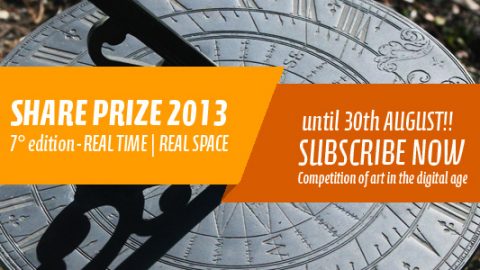