Event Horizon is the conceivable surface of a black hole, a place where gravity curves space-time so much, there is no escape, not even by light itself. Its core is the singularity, a zero point, where space and time are discontinued and is unknown what exactly happens further. A wormhole? Termination of everything? A new universe through a white hole?

When something enters the event horizon, all physics laws get distorted, while gravity becomes such, that inevitably reaches singularity and from there on…..

Singularity is a notion that has different definitions in the various fields of science, nonetheless, it retains a common axis regarding its main idea. In mathematics, it is the point where a function or an equation degenerates or diverges toward infinity, changing its nature and thus becoming impossible to define. In physics, it is the core of a black hole as well as the state right before the Big Bang, the zero point of space and time where everything is compressed in zero dimensions and density is infinite. In mechanics, it is the calibration of a machine in a way that its behaviour cannot be predicted and the physical variants involved are either not definite or infinite. In technology, it is a scenario where artificial intelligence surpasses humanity, the technological boom becomes infinite and the outcome is unpredictable.

Is evident that singularity as notion is associated with infinity, with the unknown, and the beginning of universes, both physical and conceptual, but how does it link to art and technology?

Every universe launches its existence in subject to time, while the perception of time is by birth connected to creation and technicality. In the Promethean myth, we can perceive as singularity the gesture of the maker to offer fire to the humankind, passing thusly the torch of knowledge to the creation and enabling it to create on its own. As a consequence comes torment for the creator, but also time emerges in the form of a circular punishment considered one of the first references to the circle of a clock. Additionally, fire, which symbolizes simultaneously both intellect and technicality, was the first medium for the development of all “tekhne”. Its arrival in humanity, signifies the beginning of consciousness, thus consequently the perception of time as well as the development of art (fine tehkne) and technology (the art of making) which resulted in civilization and culture, both means for recording time. In this way, technology and art as derivatives of singularity and instruments of time, have proclaimed the beginning of this world, but maybe also its very end.

Today, the further development of the promethean gift is slowly taking over the reins from its creator and “degenerates” tending to change its nature, holding us witness in an upcoming technological singularity, which can potentially get any form. The constant progress on robotics, AI, biotechnology, biomimicry, nanotechnology, quantum computing and space technology, is courting with the idea of surpassing humankind, constituting obvious for the spectator, that we have entered an “event horizon” where no one can predict what will follow.

Human-machine merger or enslave of humanity? Brain upload and immortality or cease of human species? Progression or Regression? Futurism or Archaism? Physics or Metaphysics? Utopia or Dystopia? Beginning or End?

Following to this realization, the International Festival for Digital Arts of Greece, Athens Digital Arts Festival, is calling both the art world and the world of technology, to submit works and achievements which outline, comment, foresee, or determine the upcoming singularity, the human role in this new era, the role and form of art and technology in it, in order to compose the content for the upcoming 14th edition of the festival which will take place in spring 2018.

Will you tell us your tale from this event horizon…?

Detailed information about the submission process and the call for entries is available at the following link: www.adaf.gr 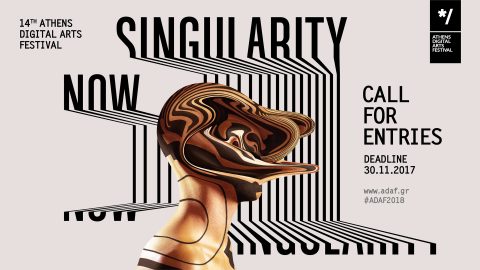